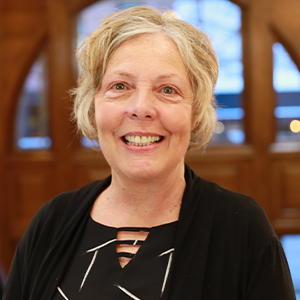 Linda Stambaugh is a Court-Appointed Special Advocate (CASA) for the Fourth Circuit Court of South Dakota. A champion for children who have been abused and neglected, Ms. Stambaugh was appointed to her first case 9 days after completing her pre-service training. The case involved four siblings, between the ages of 2−6, who had been neglected by their biological parents.

The Department of Social Services became involved after the children were found wandering the streets unsupervised and scantily clad several times. To ensure the children were cared for, the department placed the children in foster care and worked with the parents to regain custody.

Ms. Stambaugh went above and beyond her volunteer advocate role and made over 470 contacts on behalf of the children during the 1.5 years the case was open. Ms. Stambaugh facilitated many visits, even transporting the children to sibling visits in two separate foster homes in two different communities, so they could spend time together. She also helped transport the children to supervised visits with their parents (who were not licensed to drive), counseling sessions, school, and the many outings she took with the children. She logged more than 7,000 miles during her activity on this case. And she was a constant in the children’s lives during changes in professionals involved in the case.

Unfortunately, she witnessed that the children regressed when in the care of their parents and included detailed information in her court reports, information that the court would not have been aware of if she was not involved. Her reports assisted the court in finding the children permanency with a caring forever family, where they were adopted together in one home.

Her steadfast dedication helped stop the cycle of child abuse and neglect for these four children and set them on a path where they can safely heal and grow. After shining a light during the children’s time of trauma and upheaval, Ms. Stambaugh maintains a relationship with the family.

For her efforts, Ms. Stambaugh was awarded the Northern Hills CASA Optima Excellence Award in 2020 and the Spirit of CASA Award in 2021.

Watch this video to learn more about Linda Stambaugh, 2022 recipient of the Volunteer for Victims Award.