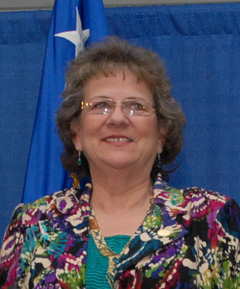 Dianne Barker Harrold, an icon within the crime victims field, passed away on Saturday, December 11, 2021.

Dianne was an enrolled member of the Cherokee Nation and spent decades working with and advocating for Tribal victims of crime.

Throughout her career of distinguished service Dianne served in many roles. Notably, she is one of the founders of Help In Crisis, a domestic violence shelter in Tahlequah, Oklahoma, an organization that provides services to victims of domestic violence and sexual assault.

She was an elected District Attorney in Northeast Oklahoma, a Tribal judge, Attorney for the Tribal Council of the Cherokee Nation, and Associate Judge for the Pawnee Nation of Oklahoma. She was also the first Native American District Attorney for the State of Oklahoma, served on the Oklahoma Attorney General’s Domestic Violence Task Force, and was Chairperson of the Oklahoma Violence Against Women Act Grant Board.

In 2010, Dianne spearheaded the Homicide in Indian Country video project, which had a significant impact on Tribal victims of crime in Oklahoma because the state compensation board changed its policy to allow for spiritual and culturally appropriate responses to victimization by tribes.

Dianne served as a Resource Delivery Coordinator for Unified Solutions Tribal Community Development Group, providing direct training and technical assistance to Tribal communities and victim assistance professionals across the Nation. She was a consultant with the OVC Training and Technical Assistance Center and a peer reviewer to evaluate U.S. Department of Justice grant applications.

In 2013, she received the U.S. Department of Justice’s National Crime Victim Service Award. She also received numerous awards throughout her career, including the Women Holding Up the World Award from the National Coalition Against Sexual Assault.

We will always be grateful for her work and will remember Dianne’s passion and commitment to ensuring rights, safety, and services for victims of crime in Tribal communities.